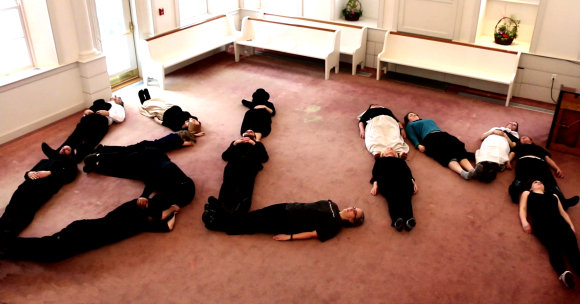 "Quaker Off" ends with this message:

We reject the racial stereotypes, objectification of women of color, and cultural appropriation in Swift’s Shake It Off video.

We ask our viewers to look at how seemingly innocent music videos are connected to wider systems of racism, because Black Lives Matter.

We love the song Shake It Off and Taylor Swift. Well, at least most of us do. Ask 5 Quakers their opinion on a pop music artist and you could get 10 answers.
However, the video for Shake It Off contains disturbing messages about race as well as objectification of people of color.
For further reading, check out:
- Jenn M. Jackson's piece on how the Shake It Off video represents white women and black women differently
- Mikael Chuks Owunna's piece on how Swift is appropriating black culture and blackness to draw attention to herself and her music
- Celeste Montaño's piece on Swift's lens of white privelege
Mark Romanek, the director of the Shake It Off video, claimed that the video is color-blind and implies that it is therefore not racist. That may have been his and Swift's intention, but color-blind art is still racist, as Monnica T. Williams' article in Psychology Today explains.
The racial messages in the Shake It Off video are offensive, but the timing of its release was insensitive as well, given the anti-racism organizing that has gained momentum since Michael Brown was murdered by a police officer in Ferguson, Missouri. For more resources on what's happening in Ferguson and around the movement to stop racism in the United States, please head over to Black Lives Matter.
Quakers' work on racial justice started in the 1600s and continues today. For some Quaker racial justice resources, check out:
- Greg Elliott's description of racial justice activities in the Quaker world today
- Vanessa Julye's article about her journey as a Friend of color
- American Friends Service Committee's South Organizing Against Racism program
- other racial justice resources from AFSC
- Atlanta Friend's Meeting's journey to become less racist and more anti-racist
Quakers have a reputation for working on racial justice in the past, but Quaker history with this particular issue has been mixed indeed. Fit for Freedom, Not for Friendship by Donna McDaniel and Vanessa Julye goes into further detail on Quakers and racial justice through history.