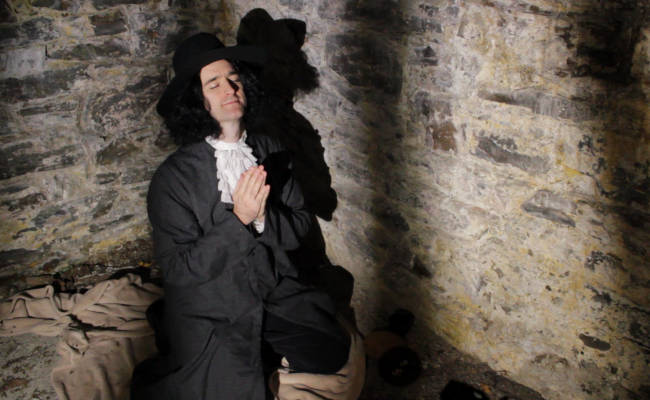 George Fox was a real person who lived from 1624-1691 and was one of the main figures in the founding of the Quaker movement. The Wikipedia page on him is great—check it out.
While the film attempts to be true to his insights and theology, not all of the quotations are verbatim. Some were edited to modernize the language; some were edited to for length. For the scholars out there, below are the full quotations in some context, with links to the source material. I invite you to read Fox's Journal and letters and the writings of other Friends.
"I saw, also, that there was an ocean of darkness and death; but an infinite ocean of light and love, which flowed over the ocean of darkness. In that also I saw the infinite love of God, and I had great openings."
— Journal of George Fox, Chapter 1
"Be patterns, be examples in all countries, places, islands, nations, wherever you go, so that your carriage and life may preach among all sorts of people, and to them. Then you will come to walk cheerfully over the world, answering that of God in every one. Thereby you can be a blessing in them and make the witness of God in them bless you. Then you will be a sweet savor and a blessing to the Lord God."
— To Friends in the Ministry
"Be still and cool in your own mind and spirit from your own thoughts, and then you will feel the principle of God to turn your mind to the Lord God, from whom life comes; whereby you may receive his strength and power to allay all blusterings, storms, and tempests."
— Letter written in 1658
"But as I had forsaken the priests, so I left the separate preachers also, and those esteemed the most experienced people; for I saw there was none among them all that could speak to my condition. When all my hopes in them and in all men were gone, so that I had nothing outwardly to help me, nor could I tell what to do, then, oh, then, I heard a voice which said, "There is one, even Christ Jesus, that can speak to thy condition"; and when I heard it, my heart did leap for joy."
— Journal of George Fox, Chapter 1
"At another time it was opened in me that God, who made the world, did not dwell in temples made with hands. This at first seemed a strange word, because both priests and people used to call their temples, or churches, dreadful places, holy ground, and the temples of God. But the Lord showed me clearly that He did not dwell in these temples which men had commanded and set up, but in people's hearts; for both Stephen and the apostle Paul bore testimony that He did not dwell in temples made with hands, not even in that which He had once commanded to be built, since He put an end to it; but that His people were His temple, and He dwelt in them."
— Journal of George Fox, Chapter 1
"Christ says this, and the Apostles say this but what can thou say? Are thou a child of Light, and have walked in the Light, and that thou speaks, is it inwardly from God?"
— Margaret Fell (Fox), quoting George Fox, in her testimony after his death
"(silence)"
— It was common practice in early Friends meetings, as with some Friends today, to wait in silence until moved by the Spirit.
"I was moved, also, to cry against all sorts of music, and against the mountebanks playing tricks on their stages; for they burthened the pure life, and stirred up people's minds to vanity."
— Journal of George Fox, Chapter 2
(As you can see, George Fox probably would not have approved of popular music, music videos, or internet memes, even as a way of telling people about his realizations about God. Clearly I don't agree with him on this one.)